Pioneering the Biochemical Basis of How Nerve Cells Function 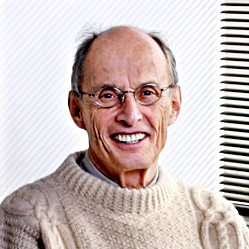 In the human brain there are more than a hundred billion nerve cells. It is common knowledge that these cells communicate with each other by sending chemical messengers, called neurotransmitters, across the junction, or synapse, between cells. When Paul Greengard (1925- ) began his research on this topic in the late 1960s, however, almost nothing was known about how these neurotransmitters act on their target cells to produce physiological responses. Scientists studying the brain were either electrophysiologists, concerned with the electrical properties of the nerve impulse, or biochemists, whose methods of identifying important enzymes in the brain required grinding up the tissue. Neuroscience did not yet exist as a separate discipline.

In the face of much skepticism, Greengard set out to find the biochemical basis for communication between nerve cells. During fifteen years of research he mapped the conceptual framework for understanding how the nervous system functions at the molecular level. These studies have provided a better understanding of a range of neurological and psychiatric disorders and have revealed targets for new therapies. For his discoveries concerning “signal transduction in the nervous system,” Greengard was awarded the Nobel Prize in 2000, shared with Arvid Carlsson and Eric R. Kandel.

Greengard was inspired by the work of Earl Sutherland and Edwin Krebs, who showed how hormones exert their effects on cells via a second messenger, cyclic AMP. Since neurotransmitters also are released from one cell and act on another, Greengard hypothesized that a similar system was operating in the brain. Focusing on dopamine, Greengard found that when this neurotransmitter binds to a receptor on the cell surface it triggers a cascade of reactions that in turn regulate a variety of functions in the cell. First, levels of cyclic AMP, or of the second messengers, rise in the cell. This activates a protein kinase, an enzyme that chemically modifies other proteins by adding phosphate groups to them. Protein phosphorylation ultimately makes it possible for the nerve cell to function properly. The result is a type of nerve signaling known as slow synaptic transmission. The Greengard laboratory also discovered a central signaling switch, a protein known as DARPP-32, which is influenced by dopamine and other neurotransmitters.

The Greengard laboratory has since found a large number of phosphorylated proteins that occur only in the brain. Of these, some are present in every nerve cell, and others in only one or a few cell types. These studies have demonstrated that various subclasses of neurons differ markedly from one to another in their chemical composition and suggest that it will be possible to develop highly specific therapeutic agents for the treatment of neurological and psychiatric disorders as varied as Alzheimer’s disease and depression. Abnormalities in signaling by the neurotransmitter dopamine, for example, are associated with Parkinson's disease, schizophrenia, attention deficit hyperactivity disorder, and substance abuse. Greengard also has demonstrated that many effects—both therapeutic and toxic—of several classes of common antipsychotic, hallucinogenic, and antidepressant drugs can be explained in terms of distinct neurochemical actions that affect the transmission of nerve signals in the brain. 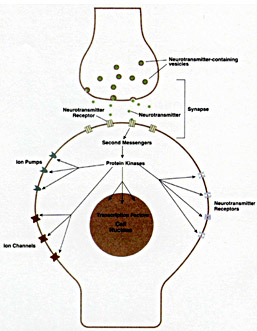 Greengard received the AB from Hamilton College (1948) and the PhD from Johns Hopkins University (1953). After postdoctoral studies in England at the University of London, Cambridge University, and the National Institute of Medical Research, and at the National Institutes of Health, in Bethesda, MD, he became director of biochemical research at the Geigy Research Laboratories in 1959. In 1968 he was appointed professor of pharmacology at Yale University and was named Henry Bronson Professor in 1981. In 1983, he joined The Rockefeller University as a Vincent Astor Professor. He also is director of the Fisher Center for Alzheimer’s Disease Research at Rockefeller.

Greengard is an elected member of the U.S. National Academy of Sciences (1978) and its Institute of Medicine, and of the American Academy of Arts and Sciences. He is also a foreign member of the Royal Swedish Academy of Sciences and a member of the Norwegian Academy of Science and Letters. In addition to the Nobel Prize in Physiology or Medicine (2000), Greengard’s achievements have been recognized with the Charles A. Dana Award for Pioneering Achievements in Health (1997), which he shared with Kandel; the Metropolitan Life Foundation Award for Medical Research (1998); and the Ellison Medical Foundation Senior Scholar Award (1999). With his Nobel proceeds, Greengard and his wife, sculptor Ursula von Rydingsvard, partnered with The Rockefeller University to create the annual Pearl Meister Greengard Prize, which honors women who have made extraordinary contributions to science.

The Nobel Prize in Physiology or Medicine, 2000
http://nobelprize.org/nobel_prizes/medicine/laureates/2000/index.html