Chemical Inhibition of Viral Replication, the Discovery of the Role of RNA in DNA Virus Replication, and the Effects of Interferon on Human Cells 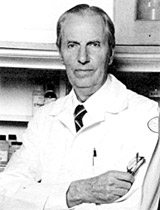 Igor Tamm (1922-1995) joined Frank Horsfall's laboratory at Rockefeller in 1949 and took up the search for inhibitors of virus replication, not only as potential agents for treatment of virus diseases but also as tools for the study of the mechanisms by which viruses multiply in infected cells and cause disease. Tamm began by searching for a natural inhibitor of virus multiplication. He isolated from human urine a mucoprotein, which he purified and biochemically characterized, that came to be known as the Tamm-Horsfall mucoprotein. The isolated and purified mucoprotein inhibited virus replication by binding the virus and competitively preventing it from adsorbing to cells and initiating infection, demonstrating that it contained what we would now term viral receptors. Today inhibition of virus adsorption and penetration into cells are still used as strategies to combat viral infections.

Tamm then went on to a four decade long research career dedicated to chemical inhibition of virus replication, principally with benzimidazole derivatives and guanidine. He used these inhibitors to elucidate many mechanisms of virus replication in infected cells and of virus-induced cell injury caused by a variety of viruses, including influenza, mumps, vaccinia, adenoviruses, and—most intensively—enteroviruses, particularly poliovirus. These studies led to understanding not only of important virological mechanisms of virus replication and cell damage, but also of normal cellular processes. In a 1960 paper he found that a benzimidazole derivative, DRB for short, inhibited replication of adenovirus, a DNA virus. This was enigmatic since DRB had also been shown to inhibit RNA viruses through inhibiting RNA synthesis. Tamm then made the prescient deduction that RNA synthesis was necessary for DNA virus replication. Significantly, this occurred before the landmark description of messenger RNA (mRNA), which is copied from cellular DNA and is then translated into protein. DRB was inhibiting that vital step in adenovirus replication.

Late in his career Tamm and his associates elucidated the regulation of interferon production by benzimidazoles, and the effects of interferon on growth, volume, division, and motility of human cells. This work helped lay the groundwork for the therapeutic use of interferon in the treatment not only of viral diseases, such as hepatitis, but also of diseases such as multiple sclerosis. 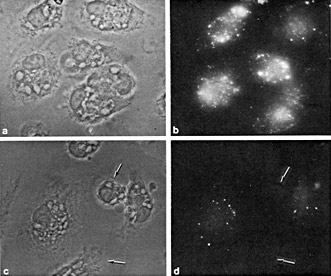 Igor Tamm attended the State English College in Tallinn, Estonia, from 1939 to 1944 and the Tartu University Medical Faculty in Tartu, Estonia, from 1942 to 1943. He escaped the German occupation of Estonia, entered medical school at the Karolinska Institute in Stockholm, and in 1945 transferred to Yale Medical School, where he received the MD in 1947. After further training in internal medicine at Yale-New Haven Hospital, Tamm joined the Rockefeller Hospital's Laboratory of Virology in 1949. In 1959 he succeeded Horsfall as head of the laboratory, and he became professor and senior physician in 1964. Tamm was named Abby Rockefeller Mauzé Professor in 1986, and professor emeritus in 1992. Many investigators who worked in the Tamm Virology Laboratory went on to distinguished careers, including Nicholas Acheson, Lawrence Caliguiri, Purnell Choppin, Walter Doerfler, Hans Eggers, Peter Gomatos, Lennart Philipson, Lawrence Sturman. Tamm was the first American to receive the Alfred Benzon Prize from Denmark, and was awarded the Sarah L. Poiley Memorial Award from the New York Academy of Sciences. He was elected to the U.S. National Academy of Sciences in 1975.