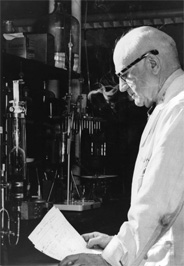 Donald D. Van Slyke (1883-1971) is best remembered as a pioneering clinical chemist who developed new techniques to quantitatively characterize the composition of blood and other body substances in health and disease. His first years at Rockefeller, however, were spent perfecting methods for analyzing proteins and amino acids, the chemical building blocks of proteins. Continuing this work, Van Slyke and Alma Hiller (1892-1958) were studying the composition of gelatin in 1921 when they noticed a discrepancy between two methods of determining the amount of the amino acid histidine. The difference could only be explained by the existence of a hitherto unrecognized substance. It took until 1938 to collect the evidence that it was a new amino acid—hydroxylysine—which is found only in collagen, the basic protein component of connective tissue such as cartilage, bone, and tendons. It is incorporated into the protein as lysine, and then hydroxylated.

Hiller had joined Van Slyke's laboratory in 1918, and for 30 years she contributed as a member of his team to a wide range of studies including blood gas analysis, hemoglobin preparations, blood and urine chemistry, and kidney physiology and nephritis. She also supervised the clinical chemical work in Van Slyke's laboratory, which made use of specimens from the hospital.

Donald D. Van Slyke received his BA and PhD degrees in chemistry at the University of Michigan. In 1907 he joined the Rockefeller Institute as an assistant to chemist Phoebus A.T. Levene. In 1914 Van Slyke was appointed chief chemist of the new Rockefeller Institute Hospital. After his retirement from Rockefeller in 1948, Van Slyke continued his research at the newly established Brookhaven National Laboratory. His achievements were recognized with numerous awards and honorary degrees, including the National Medal of Science in 1965. Van Slyke was elected to the U.S. National Academy of Sciences.

Alma E. Hiller received the BS from the Carnegie Institute of Technology in 1914 and the PhD from Columbia University in 1926. From 1915 to 1918 she worked as a chemist at the Johns Hopkins University Hospital and the School of Medicine. She moved to the Rockefeller Hospital in 1918. In 1948 Hiller became head of clinical chemistry in the Presbyterian Hospital in Chicago and associate professor of biological chemistry at the Medical College of the University of Illinois. She was author of the textbook Practical Clinical Chemistry: A Guide for Technicians (1957).